There were two teams competing over a 12 week period, the men and women competing against each other. The teams had to learn skills for budgeting, planning shopping and cooking. An outside judge came in each fortnight to judge and score the meals they had cooked. The final was a mystery box, but they were given a recipe to follow. The contestants were quite nervous on the final day but coped extremely well and both team’s scores were very close. When all the points were added up from the 12 weeks the men won over the women. Most of the clients took the recipes home and were able to cook them for themselves. 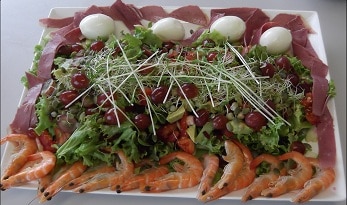 A man’s summer salad As a followup from the contest we have now produced our SRS Masterchef cookbook which has all the recipes and photos of the meals they cooked during the contest. Copies of the cookbook can be obtained at the Stewart Rehab Centre for $2.00 each.